The next generation of APSIM > Usage > Write Manager Scripts

Writing manager scripts is for advanced users. It is always much easier modifying an existing script that starting one from scratch.. C# is a case sensitive language. Upper and lower case matters.

For this tutorial, we will be using the ‘Fertilise on fixed dates (advanced version)’ manager script in the management toolbox. There are a number of input parameters for this manager script:

The parameters for this script show a range of types (checkboxes, drop down, string array etc)

Structure of a manager script. 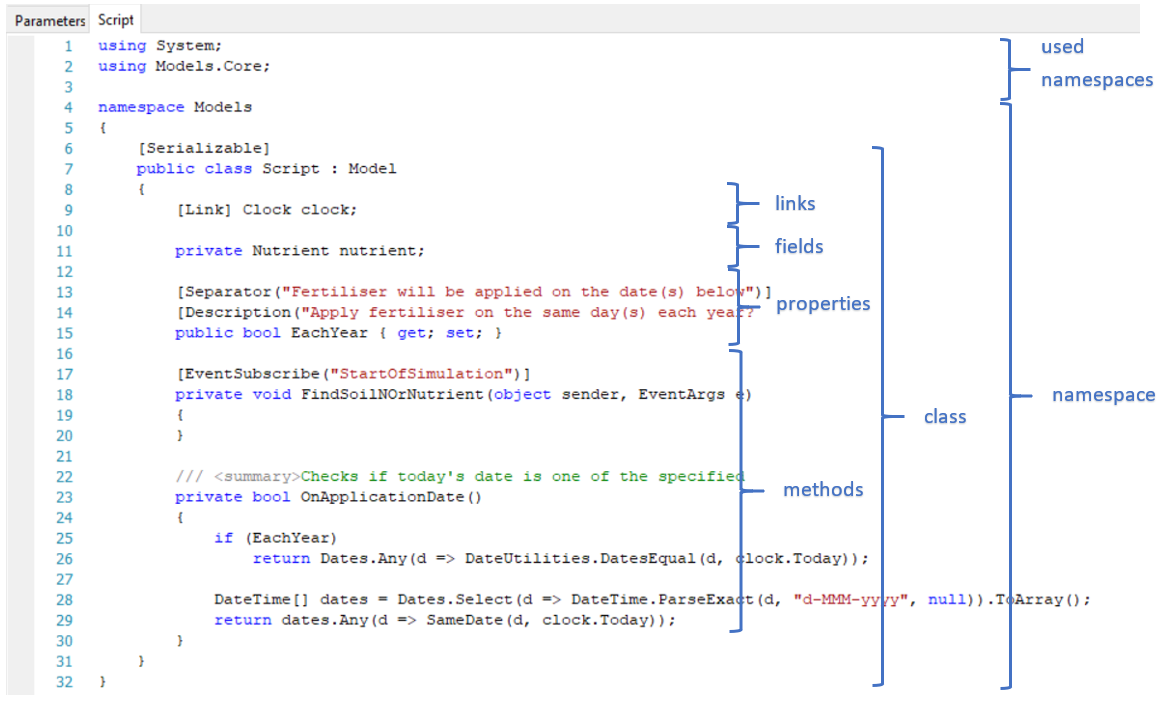 C# manager scripts will need to reference other namespaces to be able to use classes in those namespaces. For example, the Models.Core namespace contains many APSIM definitions like Link, Clock, Weather. It is best to copy lists of namespaces from other scripts.

A class is collection of fields, properties, event handlers and methods. Classes encapsulate all the manager script functionality i.e. sowing on fixed dates in this example. Classes in manager scripts should always be ‘public’ i.e. callable from other models in APSIM. They should also derive from Model i.e. have a : Model at the end of the class line.

A link defines a dependancy on another model in APSIM. If your manager script needs the value of a variable from another model then you will need to add a link to that model. An example is getting the current simulation date from the clock model. Another example would be getting the maximum temperature from the weather model. The format for links is: 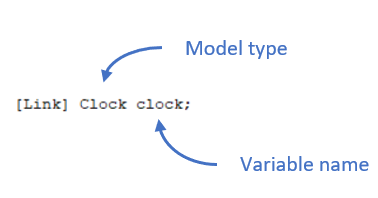 Quite often a manager script will need to define fields (variables) that are private to the class i.e. cannot be accessed by another model in the simulation. The format for private fields is:

Data type is the type of variable e.g.

These data types can also be arrays i.e. by appending [] to the end of the type e.g. double[] for an array of double. Variable name is the name that the variable will be known as in the manager script.

Properties are often used as placeholders for mapping of values from the user-input parameters tab and for publically available outputs that can be reported from a script.

Methods (functions) are where lines of code are put to perform calculations.

Methods can return the value of a single variable. The data type of the return variable is specified by Return type in the image above. It can be void, meaning the method returns nothing, or the method can return a variable of one of the data types listed for fields above. Arguments of the method are varaibles that are passed into the method to be used by the method. They are comma separated DataType VariableName format similar to fields. Most methods in manager scripts are private i.e. are not callable from other models in APSIM. They can be declared public if necssary.

If a method has a [EventSubscribe] attribute, like the image above, then APSIM (usually the clock model) will call this method when the event specified is invoked. In the example above, when the clock model publises a StartOfSimulation event at the beginning of each simulation run, this method will be called. This is a good place for performing script initialisation. Clock also publishes DoManagement at the beginning of each day (before other models do their daily calculations) and DoManagementCalculations at the end of each day (after all other models have completed there calculations). Many manager scripts subscribe to these events.